David Healy please clarify your stance on electroshock. Hear people who are electroshock survivors and their academic allies describe the multiple ways in which electroshock continues to act as a human rights violation on a day-to-day basis for those who have been subjected to it. Electroshock negatively impact people long after the final spark; a continued feeling of discrimination that one experiences as someone who was allowed to be put into this position of being electroshocked. Electric assault is intesified by “doctors” invalidating people who speak out against the brain damage shock caused them, including memory loss. Social isolation is created by discrimination, invalidation, and brain damage. The resulting disability that often leaves one unable to work, with both memory of their skills and passions wiped away from the shock and damage done by the shock to prevent new memories from forming, leaving them also economically damaged.

Marie Jones, 49, lost all of her autobiographical memory due to electroshock without informed consent, which she was subject to while going cold turkey from Klonopin.

Jason Kalendek, a 44 year old shock survivor, who had been on psych drugs for more than 20 years was conned into getting electroshock as a way to get off the drugs. Electroshock destroyed his working memory and caused amnesia; destroyed his art career. The shock was 5 years ago and he is barely able to survive, the trauma of it is the worst thing that has ever happened to him.

Tony is a 61 year old electroshock who was subjected to shock at 16 years old. He never regained memories of his childhood and continues to struggle with long term and short term memory loss.

Kenny was drugged by the time he was 14 years old and electroshocked at twenty-one. All of his biographical memory was destroyed and six years later he faces an uncertain future because of cognitive problems and post traumatic stree from what psychiatry has done to him.

Aftershock Resources for life after therapy, pills, and ect 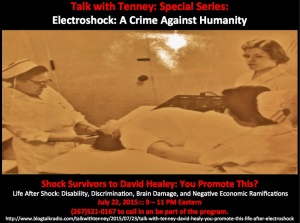